Did Marist College just get Zuckerberged?

With the recently shutdown website RedFoxRumors.com dominating the gossip last week both on and offline at Marist College, many students are quick to draw the comparison of this website to the now infamous scene in the motion picture The Social Network.

The scene students are talking about is one depicting a then college undergrad Mark Zuckerberg creating a website, in which he entitled FaceSmash, right from his dorm room. The website, serving as “hot or not” comparison of two college students, had so much traffic it eventually shut down the Harvard servers. While the effects and traffic of the site depicting Marist students, were not to the extent of which seen in The Social Network, it did spark a lot of speculation, conversation and anger throughout the Marist community.

Students seemed to show a mix of emotions ranging from downright anger and hate of the website:

To a much more comical and light-hearted reaction: 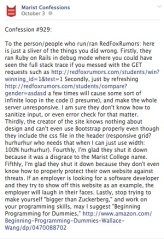 While the site itself was published anonymously and officially was shutdown by the evening of October 3rd, this hasn’t lead to the supposed creator the site to come out and acknowledge the existence of the website. The creator did so through the Facebook page Marist Confessions, a page in which students are able to submit a “confession” to the site through a Survey Monkey questionnaire which in turn will get posted onto the wall of the page anonymously. Once up on the wall students are able to like, comment or share the post as much as they want. The page itself has over 1,200 likes and regularly has students commenting and liking different posts.

The first post on Marist Confessions concerning Red Fox Rumors came from someone who was not claiming to be the creator of said site, but instead someone who voiced his distaste and general disgust with the site. This was on the night of October 3rd, shortly after the site was shutdown. From October 3rd until October 5th Red Fox Rumors could be heard throughout the hallways of Marist as well students expressing their opinions both on Facebook and Twitter. 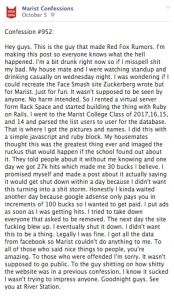 On October 5th, two different posts on Marist Confessions were made by someone claiming to be the supposed creator of Red Fox Rumors. The first post addressed the previous anonymous post concerning Red Fox Rumors and the layout/creation of the site. In the second post, the anonymous author went into great detail of how they supposedly created the site. The author states they wanted to see if he “could recreate the FaceSmash site Zuckerberg wrote but for Marist. Just for fun. It wasn’t supposed to be seen by anyone. No harm intended.” The author of this post went on to say: “To all of those who said nice things to people, you’re amazing. To those who were offended I’m sorry. It wasn’t supposed to go public.”

Senior Information Systems major Chris Taormina confirmed the creators logic and process behind the websites creation. “All of the information given is valid and is how I would have initially created the website. The heavy load response from the site could have easily been avoided by proper error handling within the code.”

While there is no way of confirming the identity of the person claiming to be the creator of Red Fox Rumors, the website itself has drawn comparisons to a similar site that emerged throughout the Marist College community back in 2008 entitled Juicy Campus.

Kait Smith, Coordinator of First Year Programs and Leadership Development and First Year Mentor for Leo Hall, was a junior at Marist during the time when Juicy Campus rose to popularity and was quick to draw the comparisons.

“This site (Red Fox Rumors) was particularly alarming to me because it reminded me of a similar site that emerged during my junior year at Marist (2008-2009) called ‘Juicy Campus.’ It was, essentially, an anonymous gossip hub for campuses all across the U.S.,” said Smith.

Smith found Red Fox Rumors through a regular Twitter search using the #Marist. After reviewing the site Smith alerted fellow members of her office as well as Housing and Residential Life and Counseling.

Back in 2008 Marist Student Government Association (SGA) established a “Own What You Think” web-based petition against anyomous attacks, originally founded by Princeton University students and administrators, according to a 2008 Marist College Circle article.

While JuicyCampus.com eventually was shutdown and is now out of business as February 2009, the effects of such websites can still clearly be seen today. Students today share similar reactions to those back in 2008.

“This site is awful for a college campus. It is completely shallow and pointless. This site did not create anything good or provide any service that would benefit students,” says Marist senior Sam Artale.  “All it did was cause problems and get people upset.”

While Sam was not personally featured on the site members of her house were, with many of them having very different reactions to the site.

“My friend kept checking back to see how many ‘hots/nots’ she got. It was as if this was boosting her self esteem. My other friend, however, got really effected by the site to the point of tears,” Artale said. “This site, used your current profile picture. So when people went to vote on her hotness, they voted ‘not’ because they couldn’t see her very well. She got so upset over the fact that she had so many nots. She went upstairs and checked it all throughout the night because it was making her feel self conscious.”

The mix of reactions from the student population continues with other students not understanding why it was even shut down in the first place.

“I honestly don’t care,” says Maris senior Wilson Mathe. “I don’t really understand why they shut it down at all. It was just a website where people could have fun.”

Another article was posted in the following months, written by a then Marist students published in the Poughkeepsie Journal concerning the same subject.