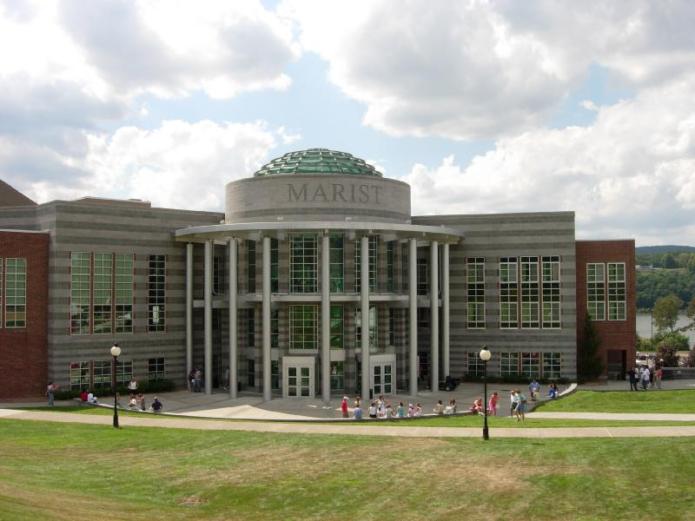 In 1905, a group of Marist Brothers purchased a small piece of property along the eastern shore of the Hudson River, intent on creating a college for young men wishing to enter the brotherhood.

Today, Marist College has become one of the Northeast’s top colleges and universities, a 210-acre, coeducational institution with over 6,000 students pursuing both bachelor’s degrees or master’s degrees. The school has been named to lists on The Princeton Review, U.S. News and World Report, and Kiplinger’s Personal Finance Magazine.

It is hard to imagine that the Marist Brothers could have seen their little school on the Hudson transform into the place that it has become, but it has been an amazing transformation to watch.

“We are very proud of what Marist has become, both in terms of academic reputation and as simply a beautiful place to come to school,” Brother Michael Flanigan said. “I know the founding Brothers would be very proud of their ‘purchase’ today.”

Following the issue of the state charter in 1946, Marist grew in both physical and academic stature. Marian Hall and Our Lady Seat of Wisdom Chapel were the first buildings built on the new campus. Both still remain today.

Lay people and women were admitted into the college in 1960 and 1968, respectively. In 1979, Dr. Dennis Murray was named the president of the college, the first lay person to be named president. Murray’s appointment began the era of change for Marist, according to Flanigan.

“Dr. Murray came in right away with a goal, and that was to make Marist a big name, and not just in the Hudson Valley, but around the country,” Flanigan said. “He really wanted to put the college on the map.”

With Murray at the helm, Marist has grown to one of the nation’s leading liberal arts colleges, one that alumni do not even recognize anymore.

“The Marist now does not resemble at all the Marist that I attended,” Bob Lynch, the director of college activities and class of 1975 alum, said. “I talk about it all the time with my classmates; I would love to be a student here now. I know I work here now, but it is obviously very different.”

Lynch points to the days where Marian Hall, a freshmen residence hall, was once the school’s main gymnasium. Academic buildings like the Lowell Thomas Communication Center and Dyson Business Center, both homes to two of Marist’s most popular majors, did not exist when Lynch attended the college.

“There was a lot more green space back then, believe it or not,” Lynch said.

Lynch said that the college has maintained its beauty and green space, despite the addition of new buildings and housing. He says that the buildings have allowed the academic programs to fully develop into the established programs that students are able to graduate from with a wealth of knowledge and experience.

Even more recent alums, like Joe Guardino, Class of 2010, feel that Marist has changed significantly since his college days. Like Lynch, he desires to be a student again, but he feels as if Marist would not accept him into their community today.

“Knowing a lot of people that work over in the admissions office, I know that the standards are getting tougher,” Guardino said. “A lot of talented and smart high school students want to come here now because the profile [of Marist] has been raised so much. I don’t think I could get into Marist today if I applied. I hope I would, but I’m not sure.”

One of the areas of the college where people can see the most change is the admissions office, where counselors are given the responsibility of choosing the next class of Marist students. Over the years, the standards for the admission into the college have changed, so much so that even students can see.

“They [the counselors] are stressing what type of person the applicant is, rather than who the applicant is on paper,” senior Eric Croci, a student assistant in the admissions office, said. “They are looking for students who challenge themselves and are well-rounded, not just in academics but in their extra-curricular activities as well.”

Croci said that the admissions office “tracks” potential students throughout the application process in the hopes of getting to know them better. Counselors monitor things like the number of visits applicants make to Marist, whether or not they send thank you notes to tour guides, or consistently send emails with questions to counselors about Marist.

The point of this process is to determine which students truly wish to attend Marist. The tracking, according to Croci, helps to make sure the right student gets into the college.

It has also become clear that the academic caliber of the Marist applicant has gotten stronger over the past decade. Alex Berube, another student assistant and tour guide explained that the average GPA of an applicant has risen significantly. For years, Marist was considered a “safety school” for bright students. Now, many of those bright students are choosing Marist as their top choice, something that doesn’t surprise Berube.

“With all the new academic buildings and the strength of programs like the sports communication and fashion programs, Marist is getting a better reputation, both regionally and naturally,” Berube said. “A Marist degree is carrying more weight nowadays than it ever has been.”

Marist has changed significantly since the Marist Brothers decided to buy the land that it has been built on. The changes will continue; the Student Center renovation nears its end, and Lowell Thomas remains next on the list. There are also discussions for new housing areas as well.

Despite all the changes, both physically and academically, the mission of Marist will always remain the same.

“The goal of the Marist Brothers was to create an educational environment where people could learn about the world and themselves in a supportive and spiritual environment,” Flanigan said. “That mission has continued on throughout the years, and I know it will for many years to come.”